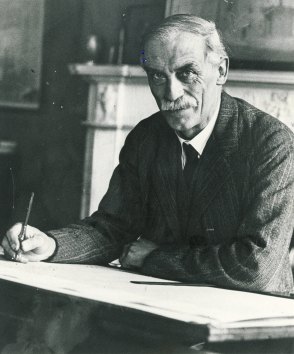 Frank Mears was Scotland’s leading planning practitioner during the 1930s and 40s.  In 1944 he was elected President of the Royal Scottish Academy, in 1945 he received an honorary doctorate from Edinburgh University and in 1946 he was knighted in the New Years Honours.  Yet in the period since his death in 1953, his distinctive contribution to the early development of planning in Scotland has been largely forgotten.

Mears was born in 1880.  His architectural training in Edinburgh at the turn of the Century had a strong Medieval emphasis and as an apprentice he worked on a number of important ecclesiastical projects, such as the Coates Memorial Church in Paisley.

It was as a result of his work with Patrick Geddes that Mears developed an interest in planning.  In around 1908, Mears became involved with the circle of artists, intellectuals and civic activists associated with Geddes’ Outlook Tower.  Geddes lamented the loss of the intellectual pre-eminence which Edinburgh had enjoyed during golden years of the Enlightenment, and the great variety of environmental and educational projects which he promoted in the city were designed to stimulate a cultural and intellectual renascence. Early in their relationship, he wrote to Mears of his hopes for Edinburgh in the following terms:

“The scheme is a great one – that of planning the cultural future of Edinburgh – a renascent capital – and of Scotland as again one of the great European powers of culture.”

An appreciation of Geddes’ close engagement with the fate of Edinburgh as a national culture-capital is crucial to an understanding of the particular perspective which he brought to planning.  His conception of the nature and purpose of planning was quite different from that of other planning propagandists.  For Geddes, the central concern was not with the technical problems of urban expansion or the creation of brave new utopian settlements but with the task of inspiring communities to an active participation in their own cultural and social renewal.

Mears soon became one of Geddes’ principal assistants and played a key role in a number of important projects, including the Survey of Edinburgh and the preparation of the award-winning Cities Exhibition. In his subsequent career, Mears was the planner who most faithfully sought to translate Geddes’ ideas on social and cultural renewal into practice.

In 1913, Geddes and Mears were engaged to lay out Edinburgh’s new Zoological Park at Corstorphine.  Much of the work was done by Mears and Geddes’ daughter, Norah, whom Mears later married.  He was keen to avoid the use of traditional cages as far as possible and his designs for rock dens and enclosures was influenced by the innovative approach to the display of animals pioneered at New York and Hamburg.

After the Great War, Mears undertook important work in two other culture-capitals during crucial periods of transition.  In 1919, Geddes and Mears were commissioned by the Zionist Commission for Palestine to prepare plans and an architectural design for the Hebrew University of Jerusalem.  In 1922, Mears assisted the Greater Dublin Reconstruction Movement with the preparation of plans for civic renewal and the accommodation of new national institutions in the early days of Irish independence.

During the twenties and thirties, Mears maintained a close interest in planning and development issues in Edinburgh.  He had an close ally in Councillor Thomas Whitson and when Whitson became Provost in the late twenties, Mears was commissioned to prepare preliminary suggestions for the City Centre.  The vision which he offered was of the historic city renewed as a modern Scottish capital and the plan placed emphasis on meeting the needs of expanding national and civic institutions. 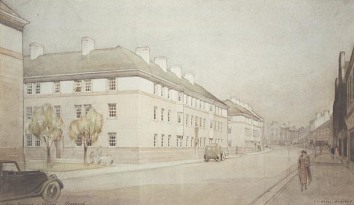 Mears was a pioneer of conservation in Scotland’s historic burghs.  In Edinburgh, he campaigned for the renewal of the Royal Mile and undertook the restoration of Huntly House and Gladstone’s Land.  In the period between 1936 and his death in 1953, he acted as planning consultant to the burghs of Dumfries, Elgin, Girvan, Greenock, Perth, Stirling and Thurso.  Perhaps the best example of his reconstruction work in historic burghs is his scheme for the renewal of Stirling’s Old Town.

Mears was keenly interested in rural issues and played a key role in the establishment of the Association for the Protection of Rural Scotland.  He stressed the importance of providing modern services and infrastructure in rural areas and in East Lothian and the Borders he applied community planning principles to the development of strategies for rural resettlement.  He was also concerned about the quality of new development in the countryside and, on behalf of the APRS, he prepared standard designs for low-cost rural houses.

One of Mears’ designs for low-cost rural housing

Mears was a strong advocate of regional planning.  In 1943, under the autonomous administration established by wartime Secretary of State, Tom Johnston, he was asked to prepare a regional plan for Central and South East Scotland, an area encompassing the entire Forth and Tweed catchments.  The Plan reflected Mears’ strong concerns about the impact of rural depopulation and advocated the return of approximately 10% of the urban population to the rural areas.  It included a strategy for the resettlement of depopulated Border valleys and its proposals for the reafforestation and recolonisation of the Slamannan Plateau laid the foundation for what was to become the Central Scotland Forest.

Towards the end of his career, Mears addressed the issue of rural depopulation in its most acute form in a strategy for the revitalisation of Sutherland.  Against the prevailing wisdom of the time, he rejected the notion that the problem could be solved “by a simple process of decanting a given proportion of large-scale industries into partially depopulated areas.”  Instead, in a plan strongly influenced by Frank Fraser Darling’s Preliminary Report on the West Highland Survey, he advocated a strategy based on the regeneration of the crofting economy through measures such as land rehabilitation, tenure reform, investment in agriculture, forestry and fishing, and the encouragement of small rural industries based on indigenous resources.

Following the 1945 General Election, the initiative in matters of planning and reconstruction passed from the Scottish Office to Whitehall and in the post-war period a technocratic planning profession was to become increasingly preoccupied with systems, procedures and regulation.  In this climate, those aspects of Mears’ planning philosophy which did not conform to British planning orthodoxy were largely disregarded.  Today, his commitment to social, cultural and environmental renewal, and the emphasis he placed on urban conservation and rural regeneration can be seen to have abiding relevance.

This article was first published in the Autumn 1999 issue of the Saltire Society Newsletter. In 1981 the Society awarded me a Robert Hurd scholarship to enable me to undertake research on Frank Mears.

Model based on plans for the Hebrew University by Mears and Chaikin, 1928

Dr. Diana Dolev of the Holon Institute of Technology in Israel is writing a book about the development of the Hebrew University campus in Jerusalem which will include a reassessment of the architectural collaboration between Frank Mears and Benjamin Chaikin from 1925 to 1929.

Dr. Dolev teaches architecture at the Holon Institute and researches the relationship between national identity and architecture.  In 2000 she was awarded a Ph.D. for her thesis on the influence of nationalist ideology on the masterplans prepared for the Hebrew University between 1919 and 1974.  She has written on architectural orientalism in the Hebrew University and the militarisation of the university campus on Mount Scopus.

In 1919 Patrick Geddes and Frank Mears were engaged by the Zionist Organisation to prepare a scheme for a Hebrew University.  In 1925 Geddes and Mears began to collaborate with Jerusalem-based architect, Benjamin Chaikin, on the preparation of the detailed architectural drawings required to realise the scheme.

Material relating to the involvement of Geddes, Mears and Chaikin in the development of the Hebrew University of Jerusalem is now distributed between a number of institutional collections, including the Zionist Archives and Hebrew University Archives in Israel, the National Library of Scotland, the Geddes collections of Strathclyde and Edinburgh universities, and the Royal Commission on the Ancient and Historic Monuments of Scotland.  In the 1990s, Volker Welter prepared a comprehensive catalogue of the material from Geddes’ Cities Exhibition held by Strathclyde University.  Currently, Grant Buttars of the Special Collections Department at Edinburgh University is working on a programme of cataloguing, conservation and digitisation of the Geddes material held in the Edinburgh and Strathclyde collections to make it more accessible and facilitate dissemination.

With these resources to draw upon, Dr. Dolev’s work offers the welcome prospect of a much fuller understanding of what Geddes, Mears and Chaikin were seeking to achieve in their work on the Hebrew University.  It is expected that her book will be published in the autumn of 2015.

See my article, A Vision of Zion, from the Spring 2000 issue of the Scottish Review.

The importance of the reference to huts in the new Scottish Planning Policy.

Simple huts for recreational use have been a feature of our rural landscape since the 1920s.  They played an important part in the development of the interwar outward bound movement, providing a way for people of modest means to get out of the cities and enjoy the countryside.  Scotland’s hutting movement is part of a wider tradition most frequently associated with Scandinavia, but found right across northern Europe.

In the post-War period, hutting went into decline in Scotland.  In the 1960s, rising disposable incomes ushered in the era of package holidays abroad.  Tenure was found to be precarious as new landowners proved to be less sympathetic to the movement than their predecessors and sought to remove huts from their land.  But the successful campaign by the Carbeth hutters to secure their future through community ownership of their site has contributed to a revival of interest in hutting more generally.

The inclusion of a supportive reference to huts in the new Scottish Planning Policy (SPP) is seen as important to the revival of our hutting tradition. Until now, there has been no specific provision for huts in Scottish policy or legislation and many aspiring hutters have seen this as an obstacle to new development.  Paragraph 79 of Scottish Planning Policy identifies huts as one of the types of leisure accommodation for which development plans should make provision where appropriate.   A hut is defined as “a simple building used intermittently as recreational accommodation (i.e. not a principal residence); having an internal floor area of no more than 30m2; constructed from low impact materials; generally not connected to mains water, electricity or sewerage; and built in such a way that it is removable with little or no trace at the end of its life.”  SPP indicates that huts may be built singly or in groups.

One of the attractions of hutting is the opportunity it offers to apply or develop design and building skills.  For many, the community dimension of hutting is an important element of its appeal and for groups of huts an accessible site will be important.  However, for some, the goal may be a secluded retreat in a more remote rural location.  There is room in Scotland’s countryside to accommodate both types of development provided care is taken to avoid adverse impacts on communities and the environment.

Ninian Stuart at his hut near Falkland

The Thousand Huts campaign is working on guidelines on good practice in hutting development.  It is engaging with the local community with a view to pursuing a pilot development on Forestry Commission land near Saline, in Fife.  Discussions are continuing with the Scottish Government on security of tenure, building standards and possible changes to planning regulations.

Planners can play an important role in ensuring that many more people in Scotland have access to a little hut in the countryside where they can relax and enjoy nature with their families.

This article was published in the Autumn 2014 issue of the Scottish Planner.