The conviction of gamekeeper George Mutch for the illegal killing of a trapped goshawk on the Kildrummy Estate in Aberdeenshire earlier this year drew attention to the tangled web of offshore shell companies which help to obscure its beneficial ownership. 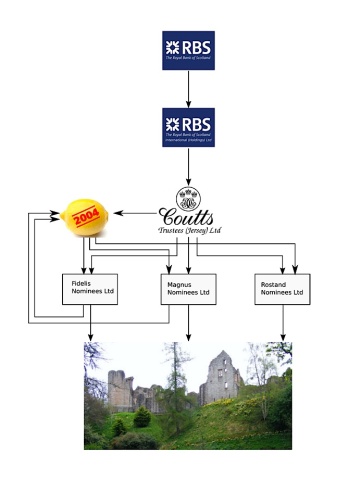 The lack of transparency, traceability and accountability engendered by such convoluted ownership arrangements was one of the issues addressed by the Land Reform Review Group.  In May 2014, the Group reported that “a practical step that could be taken in Scots law would be to make it incompetent to register title to land in the Land Register in any legal entity not registered in a member state of the EU” (Part 2, paragraph 9).

The Scottish Government consulted on this matter in December 2014 and the analysis of responses noted that 79% of respondents agreed that restricting the type of legal entities that can take ownership or a long lease over land would help improve the transparency and accountability of land ownership in Scotland and that 82% agreed that in future land should only be owned or held on a long lease by individuals or by a legal entity formed in accordance with the law of a Member State of the EU.

Despite strong evidence of public support for reform, no such measure has been included in the Land Reform (Scotland) Bill.  The explanation provided in the Policy Memorandum accompanying the Bill is that it might have led to more land being held by trusts whose beneficiaries may not be known.  This argument is weak and unconvincing.  The question of ownership by trusts is a distinct matter which should be pursued on its own merits.  The challenges involved in addressing that issue do not justify abandoning action on ownership by offshore corporate entities.  As land reform campaigner Andy Wightman has pointed out, “by insisting that the parent company is registered in the EU, the primary purpose of ensuring transparency and accountability is significantly enhanced through the public identification of Directors with legal responsibility, through the enhanced availability of information available via annual returns, and through the liability of EU registered companies to disclose beneficial ownership under EU law.”

It is difficult to know what the real reason for the climb down by the Scottish Government might be.  The concerns expressed by the minority opposed to the measure are hardly show-stoppers.  Some raised the trust issue and others suggested that it might deter inward investment, pointing to anecdotal evidence that Norwegian, Swiss and Middle Eastern owners had spent significant sums on holdings to the benefit of the rural economy.  There would, of course, be nothing to prevent anyone, whatever their nationality, from registering their title in the name of a company registered in an EU member state.

Scottish politics was energised and radicalised by the Independence Referendum and the great influx of new members experienced by Yes-supporting parties last autumn reflected a popular desire for real and substantial reform.  There will be widespread disappointment that the SNP Government has abandoned an important land reform measure on such a flimsy pretext.  It is to be hoped that the Scottish Parliament will subject this matter to thorough scrutiny during the passage of the Bill.

On Tuesday 1 September the Scottish Government offered a new reason for its decision not to pursue the Land Reform Review Group’s recommendation on offshore ownership. Michael Gray reported that a Scottish Government spokesperson had told CommonSpace that “as corporate transparency is not consistent across Europe it was found that complex corporate structures could still obscure ownership and, therefore, the LRRG’s proposal would not actually increase transparency.”  Unfortunately, this doesn’t bear scrutiny either (note how the possibility of “could” conveniently morphs into the certainty of “would not” in the course of the sentence!).  The fact that the level of corporate transparency varies across the EU does not mean that the LRRG’s proposal would not increase transparency. The requirements of even the least exacting of EU states offer significantly more transparency than those of offshore tax havens.