Brac, Dalmatia, Milna, Mrduja, The Most Serene Republic of Venice 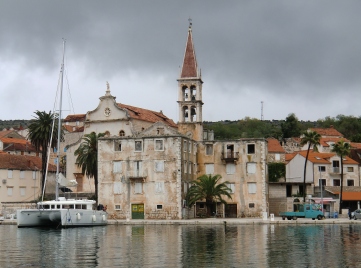 The port of Milna on the island of Brac

From the 13th Century, the Dalmatian coast began to fall under the dominion of the Most Serene Republic of Venice.

In the little port of Milna on the island of Brac the people became concerned that prosperity was passing them by and, after much deliberation, they concluded that the cause lay in a deficiency of wisdom.  All agreed that the best wisdom was to be found in the great city of Venice, so they sent two of their merchants to the capital to buy some. After some searching, they found a wealthy merchant who traded in wisdom and they agreed a deal.  The merchant handed them the wisdom in a small box and warned them not to open it until they were safely back in Milna.

The Venetian Republic and its Dalmatian colonies, 1560

The merchants of Milna expressed surprise that sufficient wisdom could be contained in such a small box, but the the Venetian merchant told them not to worry.  He instructed that on their return to Milna they should immediately assemble all the townspeople.  When they opened the box, they would find that there was more than enough wisdom for everyone.

On the way home, all went well until a violent storm forced them to seek shelter on the small island of Mrduja, just short of the safety of their home harbour. Crouched miserably over their little fire under the shelter of the trees they were overcome with curiosity and decided to open the box for a quick peek. Immediately. a little mouse leapt out and scurried off into the forest.  In the morning, the merchants continued their journey to Milna and reported what had happened.  On hearing the news, the townsfolk jumped into their boats and set off for Mrduja to search for their lost wisdom. 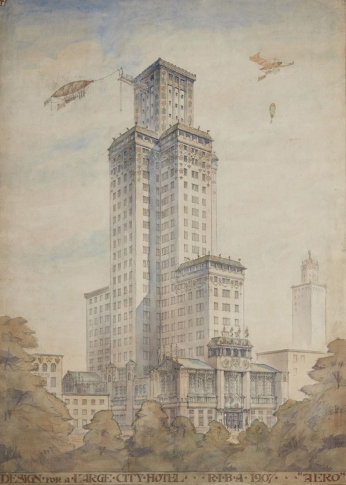 A historically important collection of drawings and plans by the architect and planner Sir Frank Mears was sold at auction this week.  The collection, previously held by the firm of Frank Mears and Partners, featured as four lots in the the Decorative Arts sale at Lyon & Turnbull in Edinburgh on Wednesday 11 November.

In the course of his career, Frank Mears prepared a number of schemes for monuments and memorials.  The collection includes a sketch by Mears and the architect Ramsay Traquair for a memorial to Edward VII & I at the foot of the Canongate in Edinburgh (1911), a watercolour of his proposal for a Scottish National War Memorial as Via Sacra (1919), and a watercolour by the architect Robert Naismith of Mears’ Royal Scots Regiment Monument in Princes Street Gardens (1950).

In 1930, Frank Mears and Charles Denny Carus-Wilson were appointed consultant architects for five new road bridges on the A82 in the Highlands.  The collection includes a watercolour panel of their design for the Oich Bridge (1930) and watercolour elevations of their bridges at Fort Augustus and Invermoriston (1933).

From 1932, Mears prepared plans and designs for a number of housing schemes in the Royal Burgh of Peebles.  The collection includes plans and elevations for schemes at Neidpath Road (1935) and Connor Street (1936).

In 1936, Stirling Town Council engaged Mears to advise on the redevelopment of Baker Street in the burgh’s historic core.  The collection includes watercolour sketches for the reconstruction of Baker Street dated 1940 and 1943. 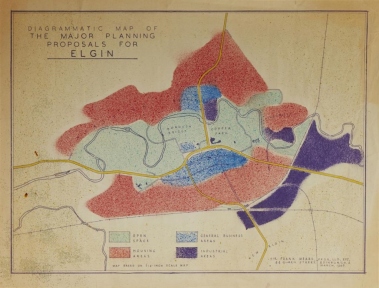 In 1938, Mears was engaged by Elgin Town Council to advise on a scheme for the historic part of the town.  Work was suspended following the outbreak of hostilities in 1939, but in 1944 the Council asked him to prepare a development plan for post-war reconstruction.  The collection includes his plans for major new residential development and the road improvements required to support it (1946).

The drawings have been acquired for the national collection by Historic Environment Scotland. 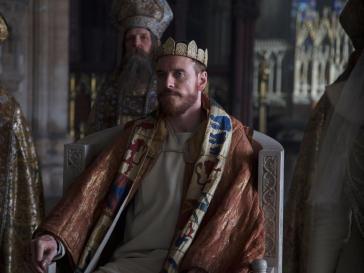 I finally caught up with Justin Kurzel’s ‘Macbeth‘, and it is a real pig’s breakfast – Noggin the Nog meets Once Upon a Time in the West!

The scenery is bleakly magnificent, but Kurzel succeeds in making it look more like a wet weekend in the Greenland of Erik the Red than 11th Century Scotland. Battles take the form of mud-wrestling with dirks in Braveheart warpaint.  Michael Fassbender and most of the rest of the cast toy with versions of mumbled Lowland demotic. Sadly, nobody seems to have told Marion Cotillard, who delivers her lines theatrically in mannered Shakespearean English, hurriedly gabbling her way through her first crucial scene as if she were worried about missing her bus. Sean Harris seems to base his performance as Macduff on the insight that his character’s name rhymes with gruff.

As a mere thane, Macbeth appears to live in a flimsy shanty town in the middle of a Highland peat bog. After he becomes king, he and his missus are able to move into an elegant castle in the high Norman style. ‘More than enough motive for murder there I would have thought.

On the positive side, Lynn Kennedy, Kayla Fallon, Seylan Baxter and Amber Rissmann make a good job of the weird sisters, steering well clear of cackling crone clichés.  And David Hayman puts in a good performance as Lennox, a man careful to stay on the right side of power.

Where Kurzel meddles with Shakespeare’s tale, it is not for the better.  Why would even a deranged Macbeth have Macduff’s wife and children taken to his castle and publicly burnt at the stake, a fate reserved for witches and heretics?  Shakespeare wisely has them dispatched at a distance by the king’s henchmen.  “The Thane of Fife had a wife. Where is she now?”  Kurzel’s reworking of the story leaves Lady Macbeth with little room for doubt.  And if Macbeth were anachronistically ensconced within the sturdy keep of a Normanised Dunsinane, why would he abandon the strength of that position to fight Macduff on open ground outside?

Orson Welles and Akira Kurosawa have both made better jobs of filming the Scottish play.